The Definition of an Offer

In this Growth Engine Daily, we're to give some thought about what strategy you've got for your follow up sequences after somebody's maybe opted in for a specific offer.

Let's just be clear about what I mean by the offer because it can often be confusing.

I'm not talking just about a discount or financial deal although that certainly counts, an offer could also be an exchange of value such as

Just consider that it is some type of benefit that they're exchanging in return for their email address or contact details.

All too often I see people concentrating on what I call the top of funnel offer again, PDF, E-book, etc and they put a lot of time whether it's in paid traffic such as Google Ads, Facebook ads, social media to get people to take those opt-ins, but they don't really put an effective follow-up strategy in place.

And sometimes falling into this trap is like using an egg cup to pour water in the top and having a hole the size of a football at the bottom. Needless to say, it is pretty pointless.

We often see these infographics with statistical reports where it says a prospect needs to be touched maybe three, five, seven, ten times before they actually get familiar with your brand or to trust you.

So why do you push all the effort into getting an opt into then not follow up with some type of nurture sequence?

The Two Stages Of A Nurture Sequence

What is important is to split the nurture sequence into two areas,

A point to consider here is that your approach should consider the length of your buyer's journey and ultimately you may know this as your sales cycle.

If you've got a sales cycle that runs over 10 days then me telling you to run an email follow up or a text follow up or a Facebook or Google display retargeting over 30 days you're going to be saying well that's ridiculous and you would be right.

A second bite or survey and upsell sequence may be better in this case to increase Lifetime value and satisfaction feedback.

I do want to put a caveat in here, it does depend totally on the length of your buyer's journey and the sales cycle.

For this purpose, I'm going to use a buyer's journey that might run over 90 days, so some form of considered purchase.

So a 3-month buying purchase, again, you can put the delay timers into a suit.

The Science of Fibonacci

For you guys who may or may not be familiar with the Fibonacci sequence, we're going to reference that in this article and you can learn more on this here Fibonacci on Wikipedia.

It's designed in email and nurture follow up to accommodate that the longer it runs, the bigger the gap between touchpoints and that's a key strategy when doing nurturing follow up.

Purely and simply because if you're just hitting people all the time and they're not responding, eventually they're going to either

But if you drip and extend that nurture sequence out over a longer period between gaps the further it goes the less likely that is, providing you're giving value.

The Structure of The Nurture

So let's dig in and just give you a quick summary on short and long term nurture sequences and credit where credit is due, to Ryan Leveque, Ryan Diess and all the big players out there.

They all use this phraseology so we don't own it, we swiped and deployed it off these guys and that is the following structure.

Imagine the situation, a prospect opts-in for let's say an E-book or a video mini-series, but they don't then take the immediate call to action after that which is maybe booking a consult or to take a tripwire or something like that.

So what do we do?

Usually, a couple of days later, if it's the 90-day sequence, we're going to send them an email or text and first of all, we're going to remind them what it is about, something like:

“Hey you recently downloaded our E-book or miniseries on X, Y and Z subject and we hope you found it of value, if you missed it you can get that here” [Add in a link in the email]

On from that copy you can use a fear tone tactic.

Not necessarily fear as in the world's going to end, or anything like that, however, we've got to talk about the reason why they probably downloaded the e-book in the first place is that they were suffering from X, something like:

“Here's a challenge that we often see, [State challenge] we've worked with people like you to solve that problem and if you don't fix this then hey, what's the status quo, how's it going to get worse”

And that's the fear strategy.

I'm sure if there are direct response copywriters in the group they're going to say, Mike, I do it differently.

That's fine, I'm not giving you a copywriting lesson here, I'm just giving you the framework.

Understand it's a fear-based email to remind them why they did it with a call to action to push them to do what you eventually want them to do after the E-book, whether that takes another tripwire cheatsheet, book a consult, book an appointment, download a voucher, whatever it would be.

Email 2: Show Them The Gain

So then what we're going to do is we're probably going to leave it either three or five days and then we're going to hit it with another email or text which is gain, something like:

“So if you're thinking about still solving this problem then ultimately here's the way you can do that, here are the benefits of doing that, this is how easy it is to get started and why you should do it”

So that's all gain and again call to action back to whatever point that you want them to do.

We're about the end of week one, day zero is opt-in, day two or three is the first of their fear then day eight is something like that is going to be ‘gain’.

What I would then do then is I would probably put something like another eight days on that before I then went with some social proof.

After the previous gain email, talking about your product, I would drop a social proof email in there, something like:

“A couple of weeks ago you downloaded X, Y, Z article or offer, here's some people who had the same challenges and how we've helped them, here's a testimonial case study from client name etc”

Then include a Call to Action ‘CTA’ - if you're ready to get started click on this link etc.

After another couple of weeks, your next communication might link them to a blog in between or something like that but ultimately this particular situation is we've got to then talk about logic.

So we've done fear, we've done gain, we've dropped some social proof in to prove what we do works then what we're going to do is put logic in there.

That could be a typical type of email, something like:

“Most people who suffer from this situation, they've got two choices, they stay as they are, they deal with it, the logical solution to improve X, overcome Y would do something like this”

“Whether you deal with us, you deal with it yourself here's a DIY tip if you want to attack it yourself, here are some blog articles or don't forget you can still get started and ultimately here's an incentive to do that with us”

If you look at the timeframe now where we're around 30 days they've still not gone and taken the action with us.

What I personally would do I would leave it another 21 days and then I'd do a recap and say, something like:

“Hey, recently you downloaded this resource, you reference the fear and the problems again, the gain that they could get out of it, add in more case studies or testimonials and then cover the logic side then push to the close of why not get started, it's not too late”

That really covers the five strategies, which takes about 50 sorts of days from a timeline as I did say five.

If you are running over 90 days you might want to drop a six and a seven email in there.

The sixth one might be a discount offer if you wanted to add that as an extra, something like:

“We noticed you didn't get started, however you stuck around, thanks for not unsubscribing, here's a 10%, 20% discount if you want to still move in the next 48 hours.”

If they're still not on board, an option would be to send them a breakup email at 80 - 90 days or so, something like:

“It looks like you're clearly not interested in this, clearly it's not for you, you've either got it sorted or just decided the timing was not right, we would appreciate it if you could just respond and say you've got it sorted, deferred it, maybe give us an area that we didn't cover for you, was there anything that didn't make you buy and ultimately we will add you back to our blog list but thanks for sticking around” 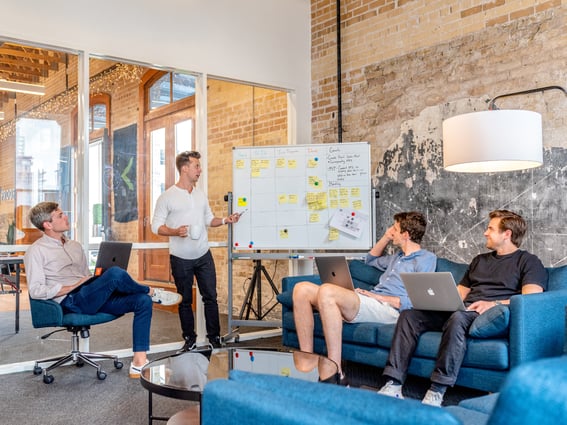 The timings, as I said earlier, are fairly loose whether it's 30, 60, 90 days, it depends what the cycle's like but what it's doing it's keeping that contact in, and that's an email / SMS strategy.

Use curious spaced subject lines on your emails which gets the open to get that content in front of them but ultimately this email strategy could be transferred into a retargeting strategy and also work from Facebook advertising, Google display advertising or even your business development reps making a telephone call to these people and these prospects at specific points.

I hope you find that valuable.

I would love you to leave me a comment below.

I'd love to understand what you're currently doing from a short term and a long term nurture sequence, is that?

I'd love to know what you're doing and how that's working for you.

Also whether this has helped you at all, maybe you've got some ideas.